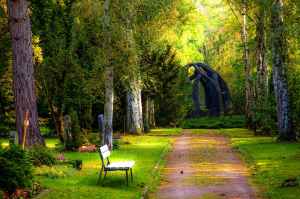 Photo by Pixabay on Pexels.com

A couple weeks ago, I planned to do some tempo work along a park loop as part of my run commute home. But once I left work and got to the starting point I knew I did not have enough gas in the tank to do the planned 800 meter reps AND take a full cooldown run home. I also didn’t want to take the bus, nor did I want to bag the workout completely and just jog home.

I took one 800 meter rep that went okay, but I knew doing several more was out of the question. What wasn’t out of the question was doing them as part of the run home, a hedge that allowed me to still get the speedwork in while curbing the amount of overall miles and reducing the overall stress of the run.

I didn’t want to do a full out uninterrupted tempo run home, but several reps of a few minutes each was totally fine. So here’s what I did:

I decided at first to run at tempo for five minutes before stopping. Several minutes into that rep, I saw a park bench ahead and decided that was a logical stopping point. I wanted to sit down and rest for a couple minutes anyway. So I got to the bench, stopped the clock and sat down for a bit.

When I felt up to running fast again, I got up, re-started the clock and took off. This time, since I went over 5 minutes by 45 seconds before, and since that felt a bit long… I figured I’d just run until I started feeling tired, and until I saw another park bench. Lincoln Park is great like that, in that its long trails have plenty of scattered park benches along the way home.

After a few more minutes and beginning to flag a bit, I saw another park bench and stopped there. Again, I rested a bit and eventually took off once ready.

Basically, I repeated this process until finally reaching the Belmont ped underpass, where I broke off the workout near Briar Street after 3 miles and about 5-7 of these “park bench” reps. I basically did the workout I had hoped to do, and in a much more natural and enjoyable fashion than my original plans had in mind.

Of course, I didn’t magically reinvent the wheel here with this workout. Running hard for a few minutes on a pathway is basically a common speed and tempo workout called a Fartlek… though the Fartlek has you run fast for time periods, and then run for equal slower recovery periods. It’s a lot more regimented than the Park Bench Run, which I did purely by feel and was driven more by impulse.

The separator with the Park Bench Workout is that I basically ran fast until I didn’t feel like running, and then resumed running fast when I felt like running. I didn’t really watch the clock, except to start and stop it.

Also, I will note I have some privilege and advantages that don’t make this simple Park Bench Run as easily repeatable in other locales. I live and work near Chicago’s vast Lincoln Park and Lakefront Trail system, which allows me to run home mostly along an uninterrupted trail rather than on busy city streets. Also, it’s basically a giant park with tons of benches, and most city streets don’t provide that. And because of the space, other pedestrians, cyclists and riders don’t present the obstacles that would be present on city sidewalks. I can spot and go around them more easily.

Still, it can be done to some extent on city streets. You can run hard for about a block and stop at an intersection. If you live in a place with long blocks, this might actually work well. However, you don’t have park benches, and probably nowhere you can really sit. Your rest intervals will require you stay on your feet.

And of course you could find a nearby park and do the workout there! Though I did the workout as a run commute, that’s certainly not necessary. Most prefer to do their runs as a separate workout before or after work (sometimes during work breaks!), and a Park Bench Workout could totally be done separately in a park. It might be a lot more comfortable than your alternatives.

So, the Park Bench Run. It’s a simple and sort of fun way to do some speedwork when you’re not totally up to a full, serious, strictly defined speed workout.