Vancouver 2020 will not happen

I don’t have issues with cancelling the race. Restrictions or not, if people are not comfortable with running it, then it’s best not to do it.

I guess it’s a bummer to train only for no race to happen, but I have other training goals I’d be more than happy to continue with. I was only halfway through my training plan, and while I was progressing I wasn’t quite making the progress I wanted.

My hotel is only lock-rate reserved and can be cancelled with no penalty. I imagine WestJet, who is already relaxing cancellation policies to accommodate travelers during this whole thing, will extend the courtesy to May flights if in fact the Marathon is cancelled and I want a refund. Right now they’re only offering to transfer or cancel March flights, so I have to play the waiting game with them. Worst case scenario, I can pay to defer the airfare and use it for Victoria in October.

VIMS basically had to pocket the 2020 entry fees, only allowing a slight discount on 2021 entries (they’re trying to negotiate something higher than 20%), or allowing you to use your paid entry towards a fall race (none of which are a marathon) if they happen. They’re also doing a ‘virtual race’, which isn’t any real consolation for those traveling.

I guess that’s a bummer, but I’ve thrown away paid entries for other reasons (I DNS’d a half marathon earlier this year, for example) and this would not be a huge deal for me.

So in some ways it works out. I can now work on some fundamental training and then start training for Victoria within a couple months.

10 Things Worth Knowing About Running The Vancouver Marathon 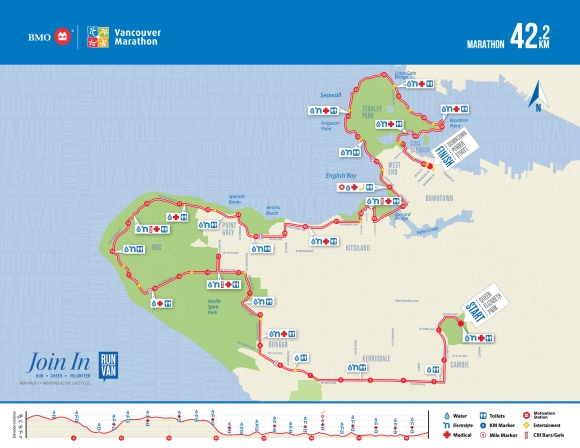 Outside of the Pacific Northwest, the Vancouver Marathon‘s not a huge deal, and a lot of people don’t know about it.

The marathon’s organizers are definitely are trying to grow out of that as evidenced by pushing hard to bring in 2018 Boston Marathon winner Yuki Kawauchi and other stars. As evidenced by the race selling out and setting an attendance record this year it appears the race’s popularity is indeed growing.

I’m among the few US outsiders outside of the PNW who made the trek to run the race. There were 17 of us from Chicago, all of us probably surprised that the other 16 even knew about this race let alone were there. There were 4 runners from nearby Indiana. There were 3 runners from nearby Wisconsin, and two were a couple running together. The great state of New York only had 24 finishers.

It’s not a destination race yet. But as the secret gets out in the US about how challenging yet beautiful the race is, I think (to quote Jim Ross) business is about to pick up.

I’m going to throw out a few things to consider for people unfamiliar with but considering running the Vancouver Marathon.

END_OF_DOCUMENT_TOKEN_TO_BE_REPLACED

I made it, guys. A long, brutal slog with a fast finish ended in 5:21:40, and the Vancouver Marathon Revenge Tour is complete.

Any amount of heat above 60 degrees makes running a challenge. Even at an otherwise mild 64 degrees, the temperature, extra humidity (it had been cloudy the previous week) and abundant sunshine made 42.3km (the Vancouver course is a hair longer than the required 42.195k distance) a brutal struggle.

I was not by any means racing for speed in this marathon. After the setbacks of the previous couple of marathons, I had two goals for this race….

END_OF_DOCUMENT_TOKEN_TO_BE_REPLACED

Tomorrow morning I’ll wake up in Vancouver, probably eat a little something and have a shot of espresso, gear up and then head down to Queen Elizabeth Park to finish what I had hoped to do last year before everything caved in on itself.

Crossing the Vancouver Marathon start line shortly before 9am (the gun is at 8:30am but we go in waves and I’ll be among the middle wave) feeling ready to run will be a substantial improvement over last year’s sickly start and DNF.

Passing West 49th and Maple, where I had to drop out last year, will be a win in itself… let alone every other milestone I slowly (and, as the race progresses, more painfully) pass en route to circuiting Stanley Park and eventually crossing the uphill finish line on Pender near Coal Harbour.

I admit I came back this year in large part to close the book on unfinished business from last year. How exactly I do in this year’s race, other than finishing strong, is not at all a concern to me. It could take 5-6 hours for all I care (though I’d like to imagine I’m at least trained to run a bit better than that). Crossing the finish line is what matters.

Even if work and health hadn’t turned upside down at the worst possible time, I look back in hindsight and think it would not have gone well anyway. In fact, getting derailed might have saved me. The start of the race was a dreadfully warm 70 degrees Fahrenheit. I stumbled on my pre-race meal planning and execution, and probably ran around town a bit too much in the final two days before the race. I also was more aggressive in my overall race pace goal than I should have been.

Maybe it wouldn’t have worked out even if work was fine, I had slept okay on the trip, and I hadn’t gotten ill. Perhaps I’d have run out too hard, and that combined with the heat could have sunk me anymore.

So, never minding it’s in the past, I can’t preoccupy myself too much over what went wrong. Objectively I can see a variety of factors last year that would have worked against me given where I was at. It probably wasn’t meant to be either way.

This year, even without as much of the speed and tempo work as I would have liked, even losing the better part of two weeks late in training to illness… I feel a lot better prepared, even if I didn’t log any 50+ mile weeks or as many 20 milers as I’d like.

I focused more on developing aerobic endurance in longer regular runs, longer haul runs. I ran a lot stronger late in my long runs this time. And though I didn’t plan it, having to run some key later runs into the wind also helped develop extra neuromuscular fitness and hone my form.

There’s a lot I’ll still want to work on next time around, and I’ll cross that bridge when I get there. For now, the only bridge I plan to cross is the Burrard Bridge about 30km into tomorrow’s marathon.

Tomorrow, the goal is to finish the Revenge Tour, and the Vancouver Marathon. Talk again soon.