On marathon cheaters, the Boston Marathon, and the importance of Derek Murphy’s Marathon Investigation

Every year, following applications, the famous Boston Marathon (which requires non-charity-runners to run a tough qualifying time to automatically qualify for their race) amends their quaifying time after the fact as a cutoff. They simply cannot accept every submission that Boston-Qualified (BQ’d).

This year the Boston Marathon’s amended cutoff for the 2019 race was close to 5 minutes faster than their posted 2018 standard at 4:52, a full 91 seconds higher than last year’s cutoff.

5 minutes may not seem like much to an observer: “Just run a bit faster next time”.

Okay, that sucks, you say. A lot of people want to run Boston, and the Boston Marathon has got to cap who gets in. That’s tough, but fair.

There’s one big problem: Many of the people who got in this year… cheated to get in. And every year, countless runners who BQ in another marathon did not do so legitimately. That wouldn’t be a big deal… if by illegitmately getting in they did not deprive another runner who legitimately BQ’d.

How do people cheat?

Even with failsafe-checks like timing mats (course cutters frequently miss timing mats along the portion they skipped), and clear discrepanices in cheaters’ results (like, say, showing a 5K section was completed in an absurd time like 6 minutes)… marathon organizers make trivially little effort to verify the legitimacy of race results, and the fake results typically stand when cheat-runners subsequently apply for Boston.

As a result, a lot of qualifiers end up missing a tougher cut-off time, and aren’t allowed to run the race they technically qualified for.

Why do this? Why do so many runners cheat to get into Boston, but not as much for a tougher race to qualify for like the NYC Marathon?

The history and prestige of the Boston Marathon has led most American runners to put the race on a pedestal, as a sort of Olympics of the marathon. Because there is such a status attached to running the marathon that isn’t attached to comparable marathons let alone any other… it becomes much more of a status symbol to run the Boston Marathon than any other race. I personally find it kind of silly in the big picture, but most other runners don’t.

Give a race that kind of image and leverage, and non-qualified runners will try harder to cheat to get into it.

Thankfully, after years of people getting away with it, one man stepped up to single-handedly combat the practice. Enter Derek Murphy. 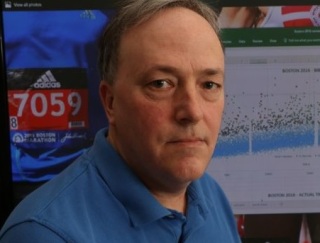 Derek Murphy is a one-man forensic-caliber hunter of marathon cheaters operating under the domain Marathon Investigation. He reviews the results of various marathons to hunt for suspect quality finishes (especially Boston-Qualifying finishes), and works with race organizers to get unworkably-suspect results (and the runner’s resulting BQ status) disqualified.

Murphy’s work over the years has helped filter out dozens of bogus results, and even gotten repeat offenders (of which there are unfortunately many) permanently banned from running races.

As Murphy’s gained a following, readers have stepped in to help out, taking a watchful eye to marathon results and forwarding to him any results that appear suspect. Murphy’s kept a weblog on his site detailing some of these and other key cases that emerge, and reader tips have helped him catch more BQ-cheaters than before.

I’ve glossed over the petty/pithy arguments against what Derek does, and they’re little more than bitter fallacy from the ethically impoverished.

Derek’s Marathon Investigation work is valuable, and important for the runners who technically BQ but may not pass the added threshold if cheaters are allowed to qualify.

I don’t particularly care for the opinions of anyone who believes otherwise.

You can support Derek’s efforts through a donation on his site if desired. That said, for Derek his biggest limit isn’t funding so much as time: He has a day job like all of us and, for all he has done, he can only devote so much energy to the project.

I encourage anyone who has methods or support that can help Derek out and catch more BQ-cheaters to not only get in contact with Derek… but also perhaps engage your own Marathon Investigation like efforts.

Go to race organizers with any suspect race-result findings, unusually good results where timing splits are unusually fast, where timing mat results are missing, where a runner BQ’d by running a race far faster than their other results. Let them know what you’ve found, and implore them to look into it.

And go to Derek as well as the media if race organizers refuse to cooperate or take action (The BAA as well as organizers of the Disney marathons have been notoriously uncooperative with addressing cheating and disqualifying illegitimate qualifiers/results, among other organizations).

Cutting a course or enlisting a mule to qualify for the Boston Marathon is petty, crooked and stupid. But unfortunately it has been effective for too many people, at the expense of so many runners who should have earned the opportunity to run Boston.

It’s worth making, and improving, the effort to make sure those who try to cheat get caught.